What Is Biophilic Design?

Modern-day humans spend upwards of 90% of their time indoors—and it’s no wonder that our incidence of illness has increased as we’ve moved inside and become more sedentary. But a 2018 comprehensive analysis of evidence from more than 140 studies of over 290 million people in 20 countries found that “Living close to nature and spending time outside has significant and wide-ranging health benefits,” including reducing the risk of type II diabetes, cardiovascular disease, high blood pressure, premature death, stress, and premature birth. This is an issue that biophilic design tackles head-on.

What is biophilic design?

In its simplest terms, this design concept seeks to increase human connectivity to the natural environment by creating a porous boundary—the ability to “step outside,” even while indoors. This, in turn, improves physical and mental health, and creates a sense of personal well-being. Although the name is relatively new, the concept has been around for many years. It gained steam as the green building movement transitioned from the mid-1990s and into the early 2000s, with designers and architects recognizing the need for spaces that weren’t just efficient and kinder to the environment, but also that directly benefited the people who used them. Over the past decade, as technology has advanced with lightning speed and people have begun to feel more disconnected—from both the planet and from each other—biophilic design has moved to the forefront of commercial design. 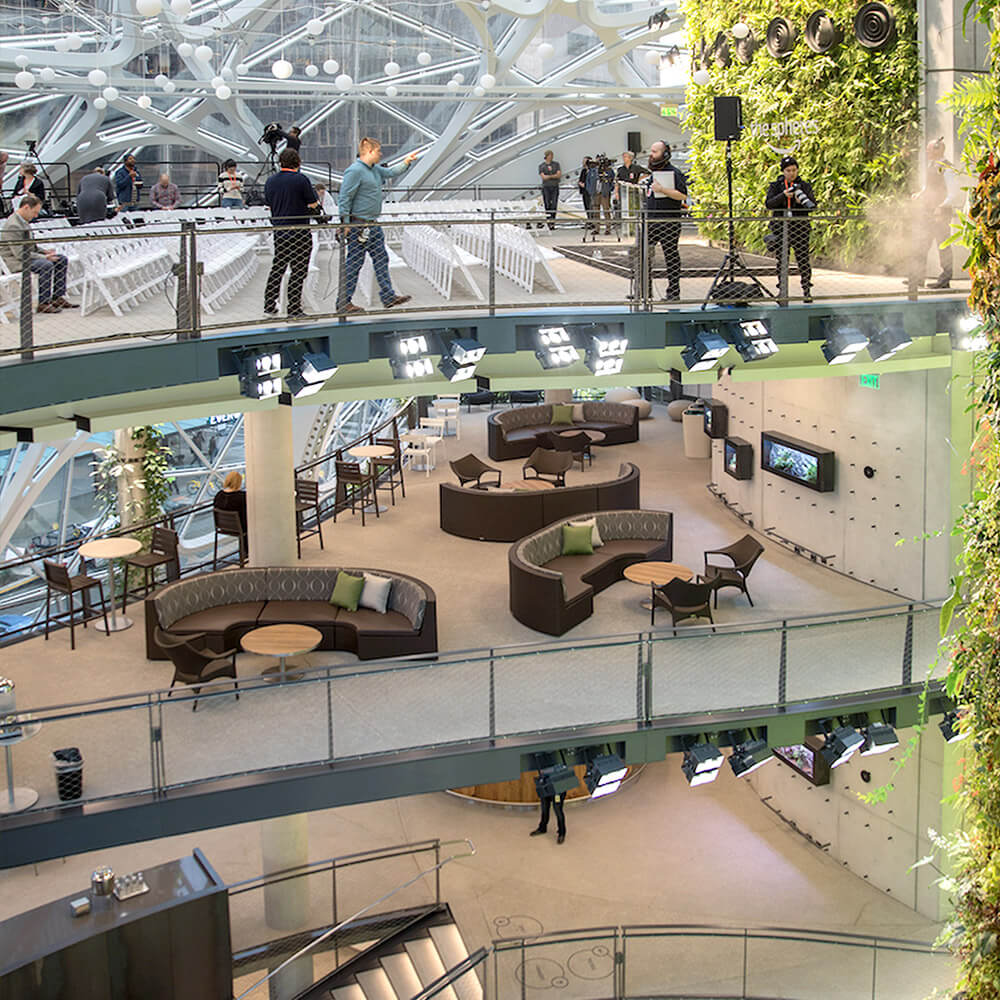 Seattle Spheres, located in downtown Seattle, WA, is an example of biophilic design in action: three conservatories consist of related and complementary elements that create an interconnected “habitat” at Amazon’s corporate campus. This design cohesion allows employees to interact with nature and each other on a daily basis. 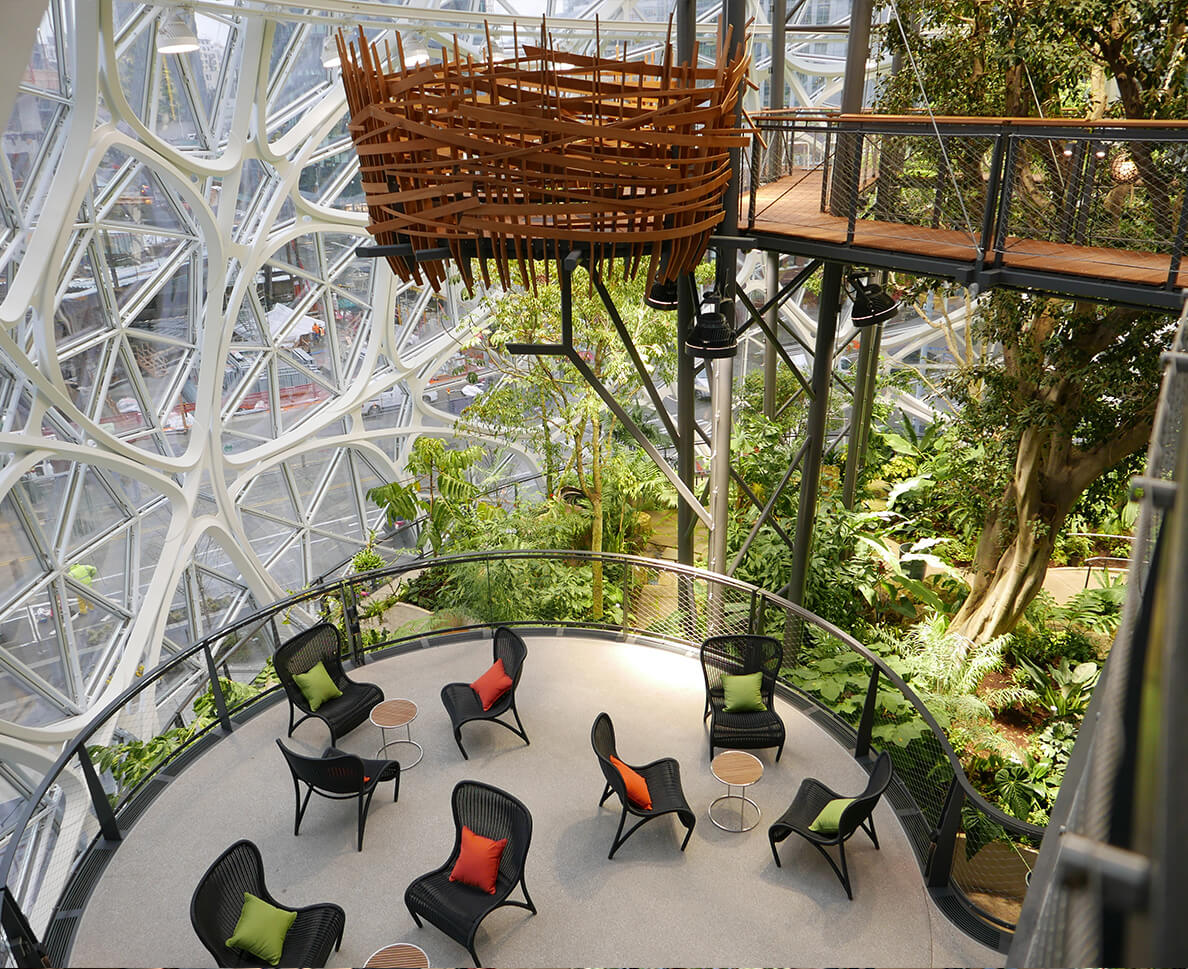 The complementary repetition of natural materials and industrial elements create an interactive space that leads to an enhanced sense of comfort, security and emotional attachment to the space. Our natural teak and stainless steel coffee tables and side tables were used throughout, forming a subtle connection between the structural elements, the furnishings and natural plantings.

Since the beginning of time, humans have been intuitively predisposed toward adapting to and reacting with the natural world. But in the quest for the bigger, more densely packed buildings to accommodate a larger number of people, many designs have ignored this. Instead, they’ve created sensory-deprivation settings that lack natural light and ventilation, that bunch people together in close—and unnatural—quarters like walled cubicles, or that eschew organic shapes, forms, and materials. Studies over the past few years have shown that environments like these, with no outside views, natural light, or plants, and the isolation tension created by unnatural separation, can actually increase the incidence of fatigue and the symptoms of illness, and reduce performance.

Biophilic design stands to play an important role in human well-being. But it’s not about simply including a few potted plants in a design; instead, the entire design must be made up of related or complementary elements that create an interconnected “habitat.” This repetition encourages interactive spaces, from person to person and person to environment, which leads to an enhanced sense of comfort and security, and even an emotional attachment to the space itself. Users then experience more positive social interactions, which fosters community—and enhanced productivity and performance.

However, as Stephen R. Kellert, Professor Emeritus at Yale University’s School of Forestry and Environmental studies, cautions, the end goal of biophilic design shouldn’t simply be about making people more productive at work. He says, “It is important to realize that biophilic design is more than just a new way to make people more efficient by applying an innovative technical tool. . . The successful application of biophilic design fundamentally depends on adopting a new consciousness toward nature, recognizing how much our physical and mental wellbeing continues to rely on the quality of our connections to the world beyond ourselves of which we still remain a part.”

As biophilic design has become more sophisticated, customers and employees have latched on. Many now make purchasing or employment decisions based on not only the brand or business’s environment, but also its commitment to the ongoing support of eco-friendly policies. Human resources, school administration, and change management professionals are listening, and are beginning to advocate for biophilic design in offices, municipal buildings, and higher-education institutions. It’s all part of the movement toward making people feel more connected with the natural environment, with their own wellness, and with each other, even in a high-tech, high-stress world.

The journal Biophilic Cities is a great resource if you’re interested in learning more about biophilic design, how it is being implemented in cities around the world, and how to get involved in your city. 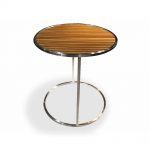 MU Side Table, round 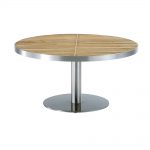 June 2019
Best Investment for You and the Planet
Read more

March 2019
Inside Out: Extending Your Interior Outside
Read more
Create a new list