Sneak Teak: How an Asian Tree Became the
World’s Most Prized Furniture

Here’s a quick design quiz: which material performs equally well in hot-and-dry or cool-and-humid climates, can withstand the weather no matter the season, and looks even more distinguished as it ages?

If you answered “teak,” you’re right on the money. Teak furniture has been sought after for centuries for its beauty and durability, and its singular ability to shrug off rain, snow, wind, and blistering sun without losing an ounce of its considerable charm and functionality. Let’s take a deeper look at where teak wood comes from, its long history in design, and why today’s designers turn to teak when they want to outfit a space with timeless details.

The Origins of Teak

The teak tree, Tectona grandis, is native to the rain forests of India, Laos, Thailand, and Myanmar, but is now grown in nearly 40 countries throughout the tropics. The tree can grow up to 130 feet tall and 12 feet in diameter, and take 80 years to fully mature. But it often lives much longer; the world’s oldest and largest teak tree lived in Thailand for 1,500 years, and reached a height of 154 feet. The leaves of the teak tree are almost comically large, measuring up to 24 by 36 inches, and have a surface rough enough to stand in for sandpaper.

Traditionally, teak trees have been harvested by girdling, or removing a wide strip of bark all the way around the circumference of the trunk. This causes the trunk above the strip to die and dry on the stump, making it much lighter come logging time. As in centuries past, elephants are still used in some parts of Southeast Asia to move the enormous logs into a river, where they lie in wait for monsoon season. As monsoon rains swell the banks, the logs float to the opposite bank. 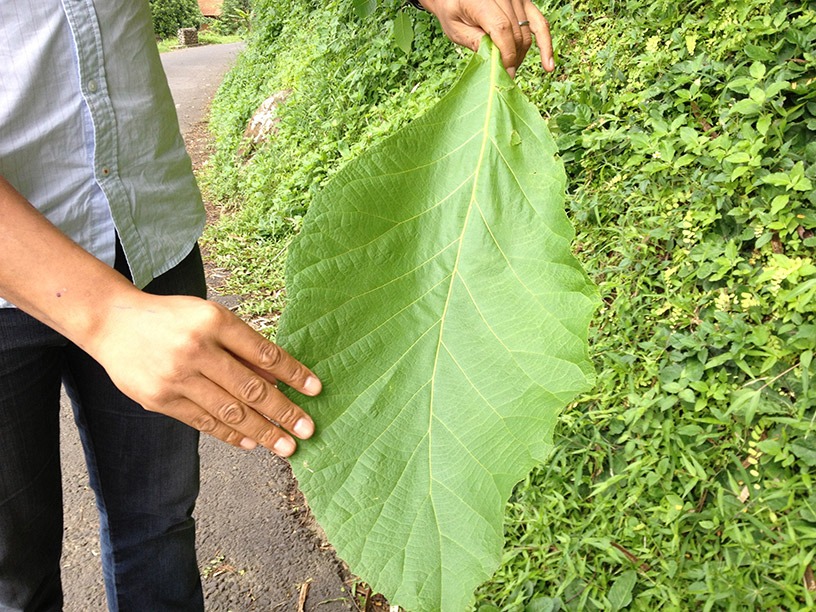 The heart of teak.

The wood’s thin outer layer, called sapwood, isn’t used in teak furniture or building; that use is reserved for the inner layers, or heartwood. Teak has been used since prehistory, and tools and objects made from it more than 2,000 years ago have been found in caves in Western Asia. Teak’s popularity began to skyrocket in the seventh century, when engineers and artisans noticed its natural resistance to termites and used it for building the homes and furniture of the well-heeled. It was also used extensively on doors and in the decorative carvings of temples, especially in Thailand.

The teak tree has since been cultivated in Africa and the Caribbean, but Indonesia is currently the largest producer, with the majority of commercially harvested trees for teak furniture grown on tightly regulated plantations. Only a set number of trees can be felled per year, and each harvested tree must be replaced with a new planting. 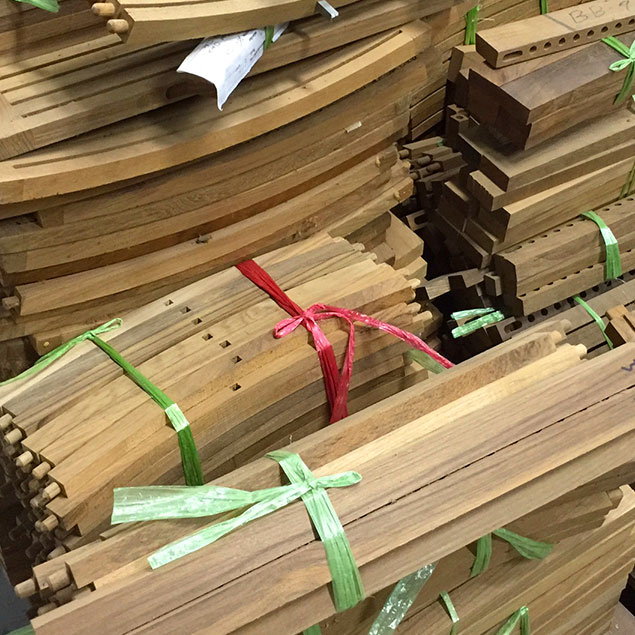 Ideal for longetivity, teak is time-tested and highly sought after. 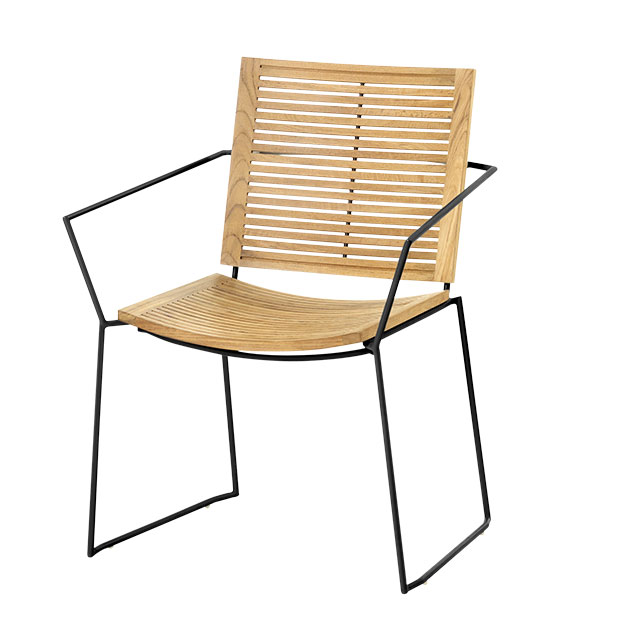 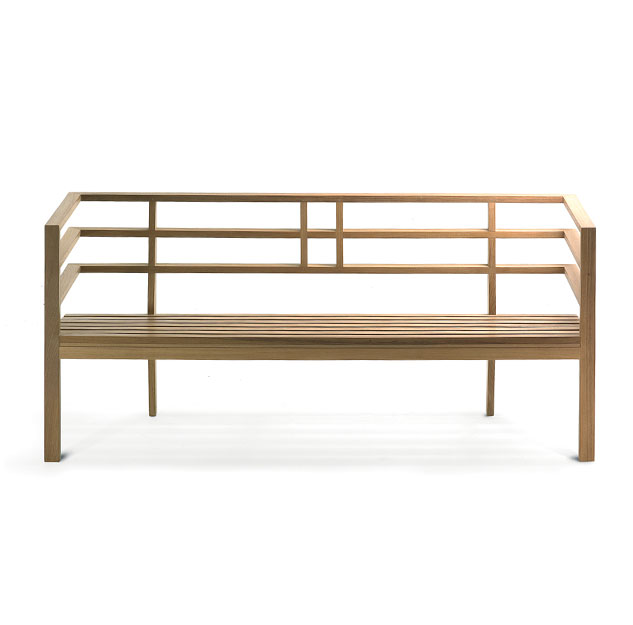 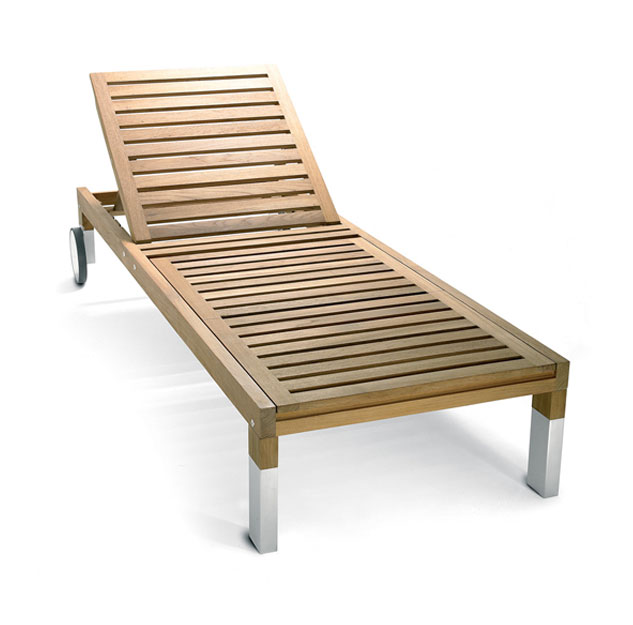 Teak’s resistance to dry rot made it an ideal choice for ship builders and it was often repurposed for outdoor seating.

In the late 1800s, a rush of building projects in Europe led to the depletion of oak, and the hunt for a replacement for this favored wood began. The Dutch, who colonized Indonesia, observed teak’s resistance to dry rot, and used it for shipbuilding. (Little did they know, they weren’t the innovators: an archaeological dig in Berenice Panchrysos, an ancient Egyptian port, turned up a 2,000-year-old example of boatbuilding with teak.)

Shortly after, the Dutch began exporting the wood. When sea captain Hans Niels Anderson reported that his cargo of teak had sold in England for a 100-percent profit, it ignited a teak “madness” rivaling the gold rush.

From the deck of the Titanic to pleasure yachts and many modern cruise ships, teak is still the preferred material for boat and ship decks and trims today. The wood is also used widely for teak furniture and architectural garden elements such as gazebos, as well as for door and window frames, flooring, wall paneling, window blinds, countertops, cutting boards, vases and art objects, indoor beams and columns, and cabinet veneers.

What is it about teak that makes it a timeless design choice, especially for furniture?

This hardwood possesses a tight grain that’s high in the concentration of oils. The oils act as natural weatherproofing, protecting the wood from splitting under intense heat and sun, as well as from exposure to salty air. The natural protectants also prevent unwanted hitchhikers, like insects and the fungi that can cause dry rot. Teak’s lower shrinkage ratio prevents it from expanding and contracting significantly when exposed to changes in humidity, which makes it more resilient. And its natural resistance to corrosion makes it an easy partner for different metals.

Teak’s unique weather and rot resistance are to thank for its longevity, and ancient beams of teak wood can still be found today on Indian, Chinese, and Burmese palaces and buildings, as well as on European and Asian bridges; the oldest known example is U Bein Bridge in Myanmar, which was constructed from the remains of a Burmese palace in the 1850s. When stored in a covered location, the wood can last indefinitely, so many examples of centuries-old teak furniture and art objects survive in museums around the world.

Teak is a smart, timeless investment that can be passed down through generations.

While teak’s grain pattern is mostly straight, it has small swirls or waves where the grain has become interlocked (turning at 90 degrees), which give it personality. Unlike many other woods, as untreated teak ages, it transforms from a rich honey hue to a deep golden brown and later to a distinguished silvery-gray patina—the familiar “old English garden” look that has captured the imaginations of designers and homeowners since the Victorian era. Whether a simple stacking chair or a more elaborate architectural outdoor element, it’s easy to maintain teak’s youthful warm tone by applying an oil made especially for teak wood (usually a blend of tung and/or linseed with resins to thwart damage from UV rays and mildew).

Teak furniture is also exceptionally versatile, complementing both traditional and sleek contemporary styles. From garden and patio benches made for shady rest breaks to slatted rolling loungers for soaking up the afternoon sun, or bistro tables and stools that invite conversation, teak furniture is at home on an apartment rooftop, in a community green space, on a beach-house porch, or poolside at a luxury hotel.

When planning your outdoor design, take a closer look at teak furniture. It may be pricier than other types of hardwoods, but because it lasts twice or three times as long, it’s a smart, timeless investment that can even be passed down through generations.

December 2018
Not Gone With The Wind: How to Design Rooftop Spaces
Read more