First there were traditional offices—a series of sterile rooms with doors, where people mostly kept to themselves in the course of a day. In the 1950s, the semi-open office plan, à la Mad Men, gave higher-ups the enclosed office by the window, while their secretaries and assistants sat at rows of open, and frequently noisy, desks. As the 1970s crept by, offices morphed into “cube farms,” with flimsy walls that supposedly offered privacy and noise reduction. Then, as the 1990s gave way to the 2000s, a new kind of corporate design took shape: the open-plan office, a barrier-free space with desks pressed cheek to jowl, where each employee is on full display of the next, all in the misguided attempt to encourage collaboration and creativity.

The open-plan office evolved in response to businesses expanding their workforce without expanding their physical footprint—whether because of budgetary restrictions or lack of real estate that suited the company’s needs. To keep construction costs in check, they did away with traditional enclosed offices in favor of areas that accommodate multiple workstations. It probably won’t surprise anyone to know that most employees, even many of those back in the original open offices of the 1950s (in Germany, the concept was actually discarded, following pressure from workers’ unions), don’t like working in these environments. But this isn’t just a personal preference. As it turns out, open-plan offices are detrimental to employees’ physical and mental well-being.

Scientific studies over the past several years have shown that entirely open offices are problematic for a number of reasons. Barrier-free spaces mean that there’s no buffer between one employee and another. This promotes the spread of a variety of diseases, from the common cold and the flu to chickenpox, measles, and staphylococcus infections, which leads to employees taking more sick time.

Lack of barriers also creates psychological stress. When there’s no buffer between us and another person, conflicts can quickly intensify. This goes double when there’s a demanding boss in the mix. And the visual pollution that develops in many open offices—whether from  being in full view of someone else’s clutter or , of overstimulating color palettes or an overload of decor or nonfunctional furniture like bean bag chairs and swings—is overstimulating and can lead to reduced creativity.

Introverts, who make up one-third to one-half of the population, are especially at risk in environments that are noisy, visually busy, or that require near-continuous social interaction. Think about that. Nearly half of the workforce in any single open-plan office may be forced to work in an environment that’s especially harmful to their well-being.

And whether introverted or extroverted, humans are instinctively on edge in spaces where their backs are to others. This feeling of being watched causes the body to produce cortisol, the hormone identified with stress. Too much cortisol is associated with everything from weight gain to immune system suppression. And when the immune system is down for the count, a host of acute and chronic diseases can take hold.

Open-plan offices and the modern emphasis on multitasking forces employees to bounce from one interruption to the next. This means that their attention is never focused completely on any one task. A recent study shows that this perpetual ping-ponging actually causes permanent damage to the brain, especially in areas related to cognitive control and the regulation of emotions and the feeling of motivation. As if it couldn’t get worse, chronic multitaskers develop decreased working memory (which controls the ability to store information related to what one is working on) and long-term memory.

To counteract employee dissatisfaction and decreased employee productivity and creativity, smart business owners are now moving away from the open-plan office and reimagining their corporate design in a more integrated way, following one or more of these trends: 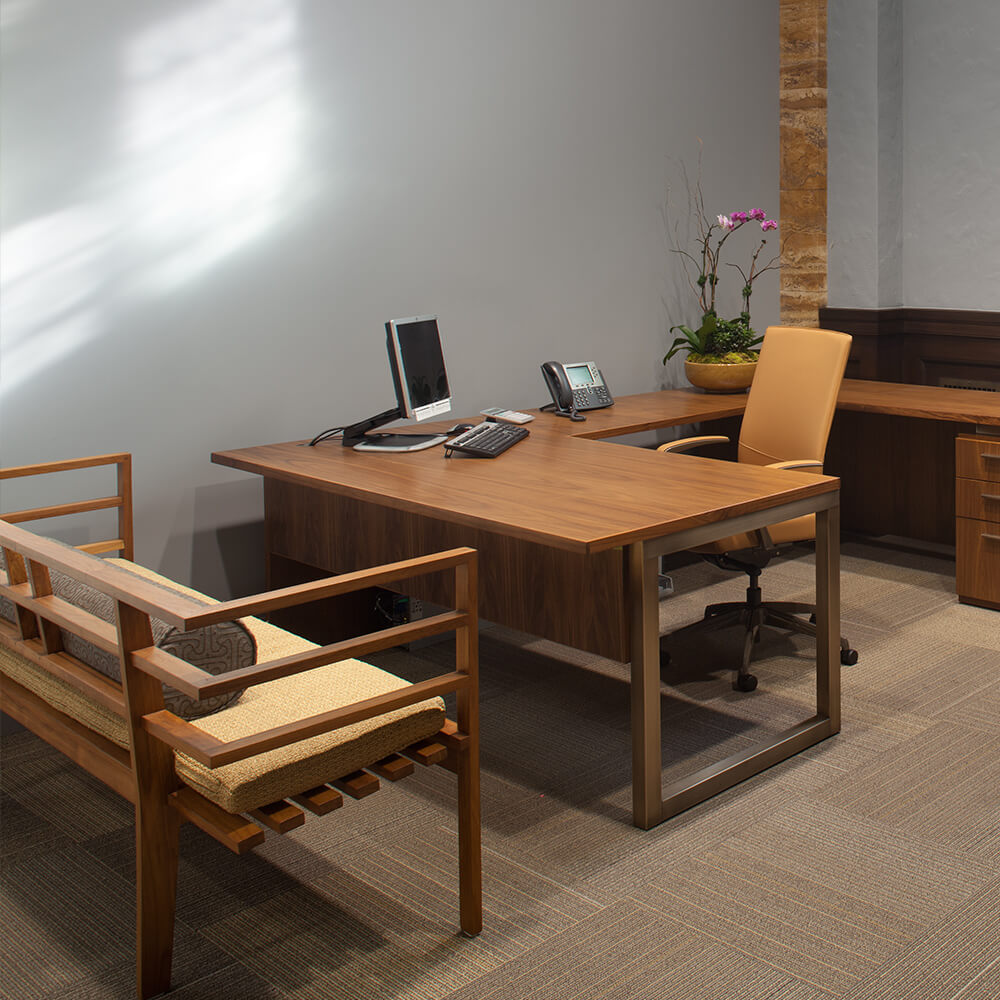 Traditional enclosed offices placed in the interior of the facility, with social areas or meeting rooms along the walls perimeter allow: (1) anyone in the office to pull up a chair and enjoy the view outside, and (2) reduces the sense of hierarchy that comes from the old school office with a window, once the provenance of VIPs. 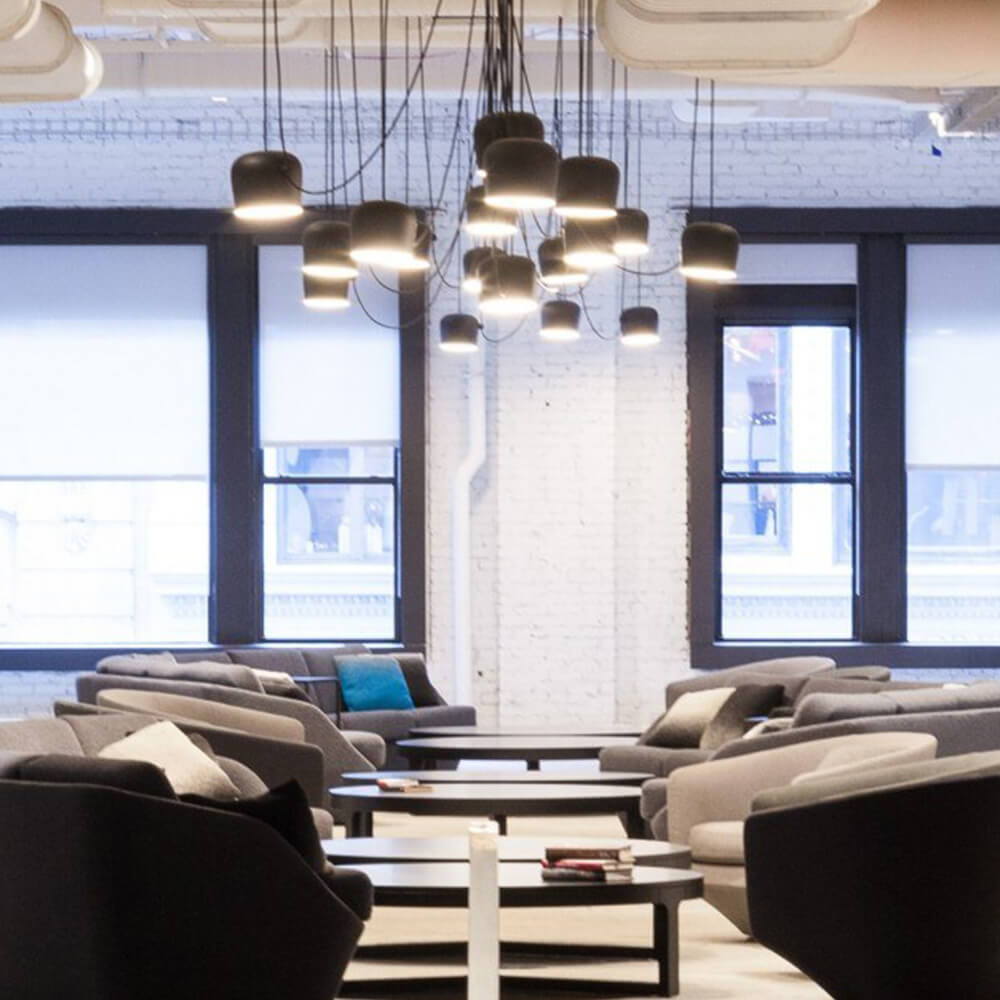 Lighting technology has improved by leaps and bounds over the past couple of decades, which means interior spaces can be lit with products that mimic natural light. Those once-dreaded interior offices now become pleasant places for solo work. 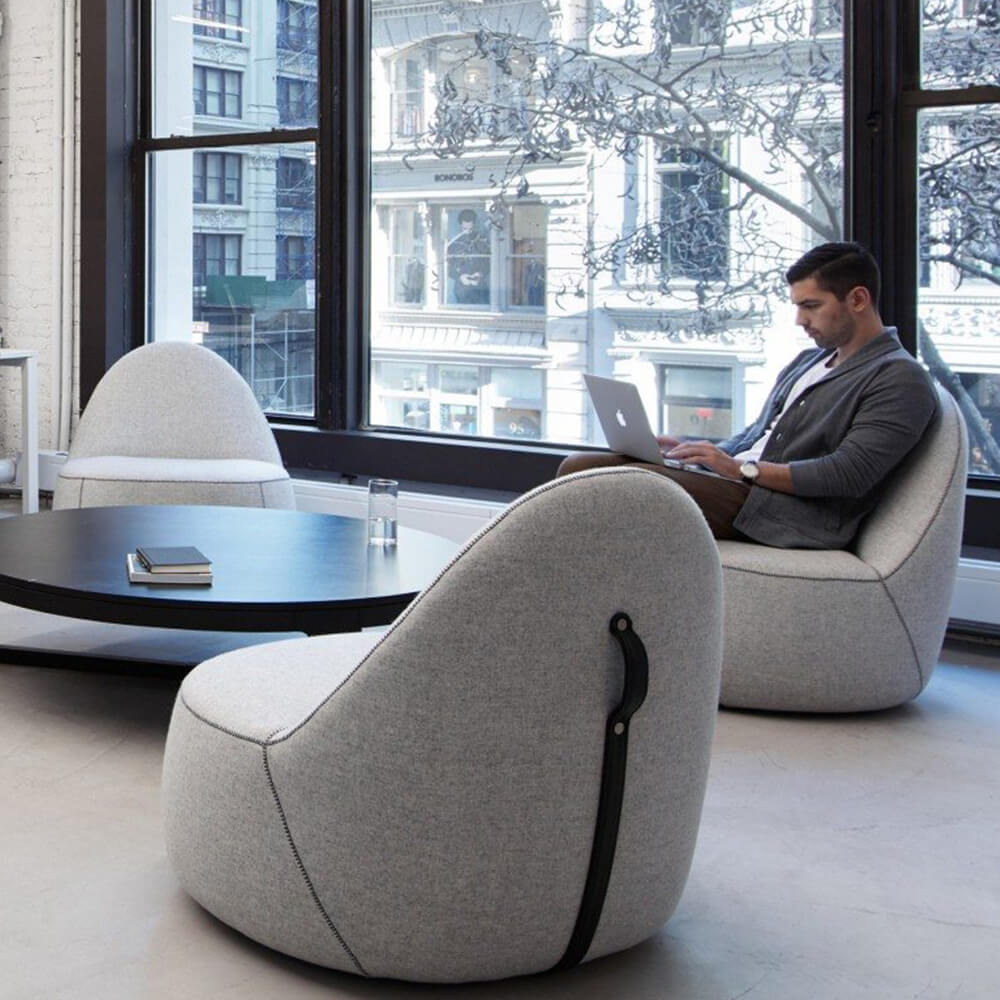 The modern office needs to have spaces that can accommodate small groups, larger groups, and individuals, often in the same area. Flexible spaces also allow employees to move around throughout the day, instead of feeling tethered to a desk. By investing in comfortable, functional ancillary furniture[link to ancillary furniture post], like armchairs, coffee tables and side tables, that can be rearranged as needed, businesses get more bang for their often-restricted buck. 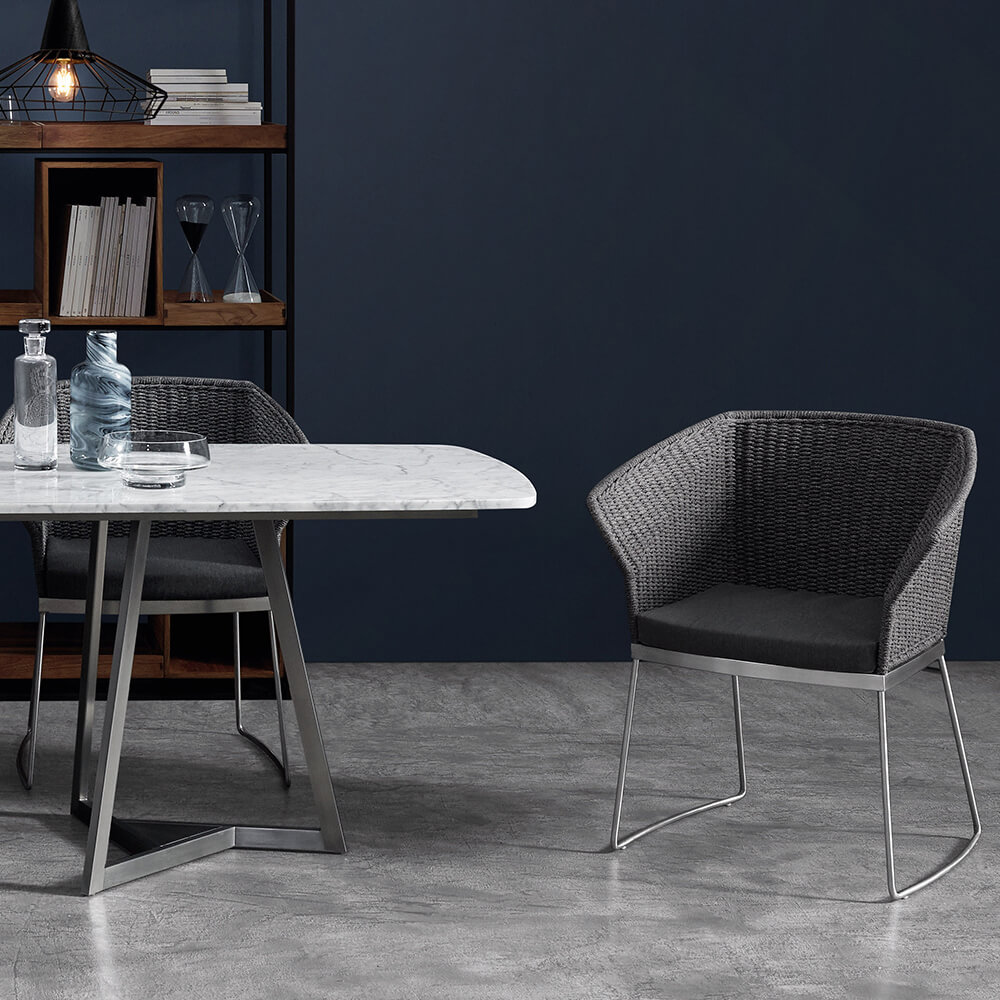 These typically take the form of rooms with doors where employees who don’t have a solo office can come to work, free of noise and distraction, for a time. Note: these are not the glass- or Plexi-enclosed “privacy booths,” only slightly larger than a phone booth and anything but private, that have been popping up everywhere. Do these really improve on the shortcomings of an open-plan office? Instead, opt for several larger rooms with solid doors and comfortable furniture for working or for one-on-one conversation. 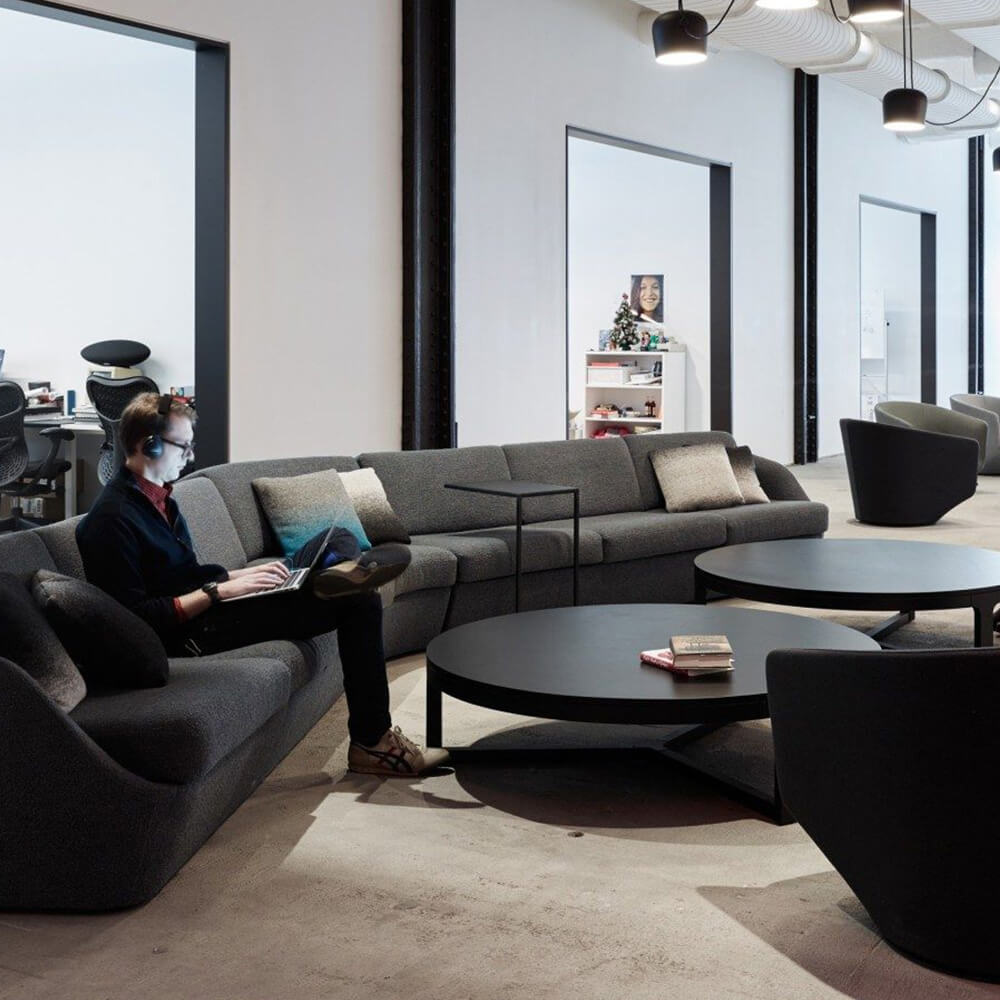 While these spaces can be used for work when needed, they’re meant primarily for relaxation and conversation. A reimagining of the traditional lounge, where staff can hang out and chat while taking a break from the demands of the workday, they often include ancillary furniture like sofas and sectionals, cushy armchairs, and ottomans. Social spaces aren’t just something that sounds great on a corporate brochure; they’re also integral to creating an environment that feels supportive, comfortable, and homey—which leads to increased employee satisfaction. 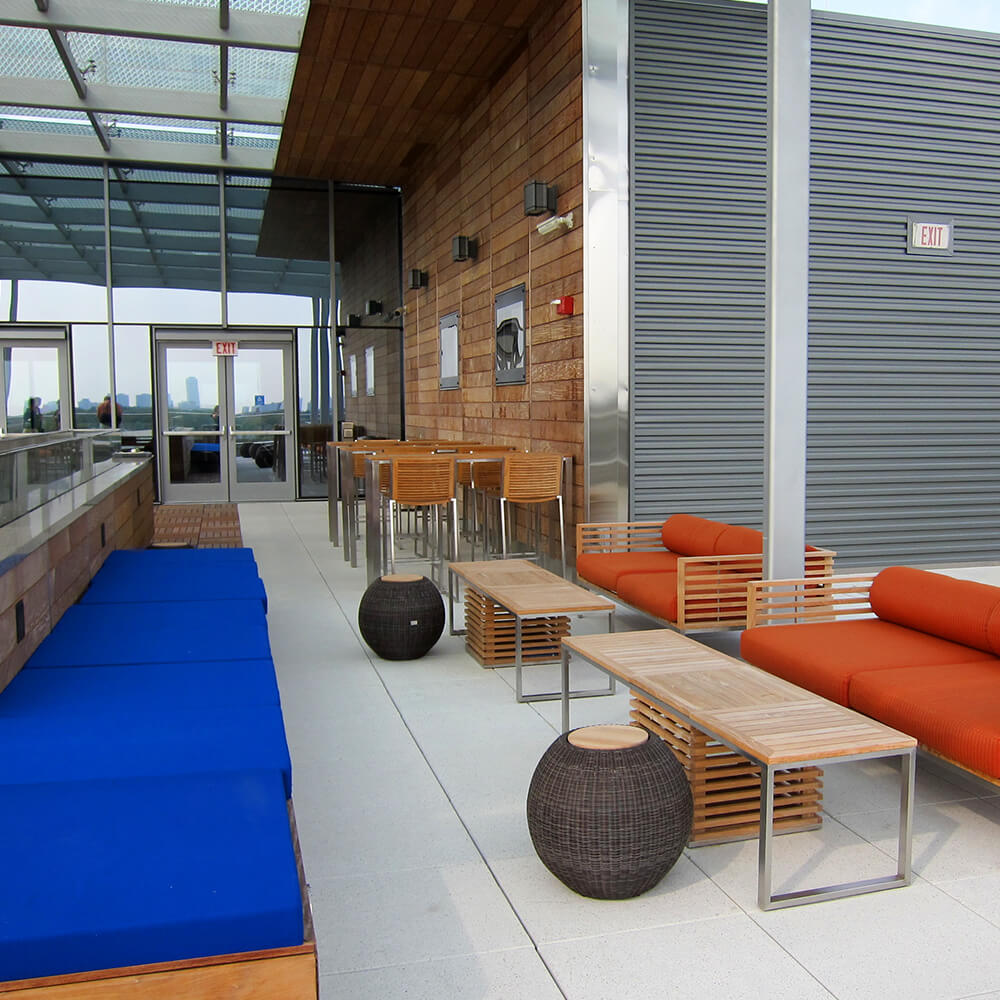 Many employers have become savvy about investing in outdoor areas. From hardscaping to landscaping and gathering spaces with a range of comfortable outdoor furniture options, these space give employees a place to work and connect with one another and with nature, which is essential to our health. 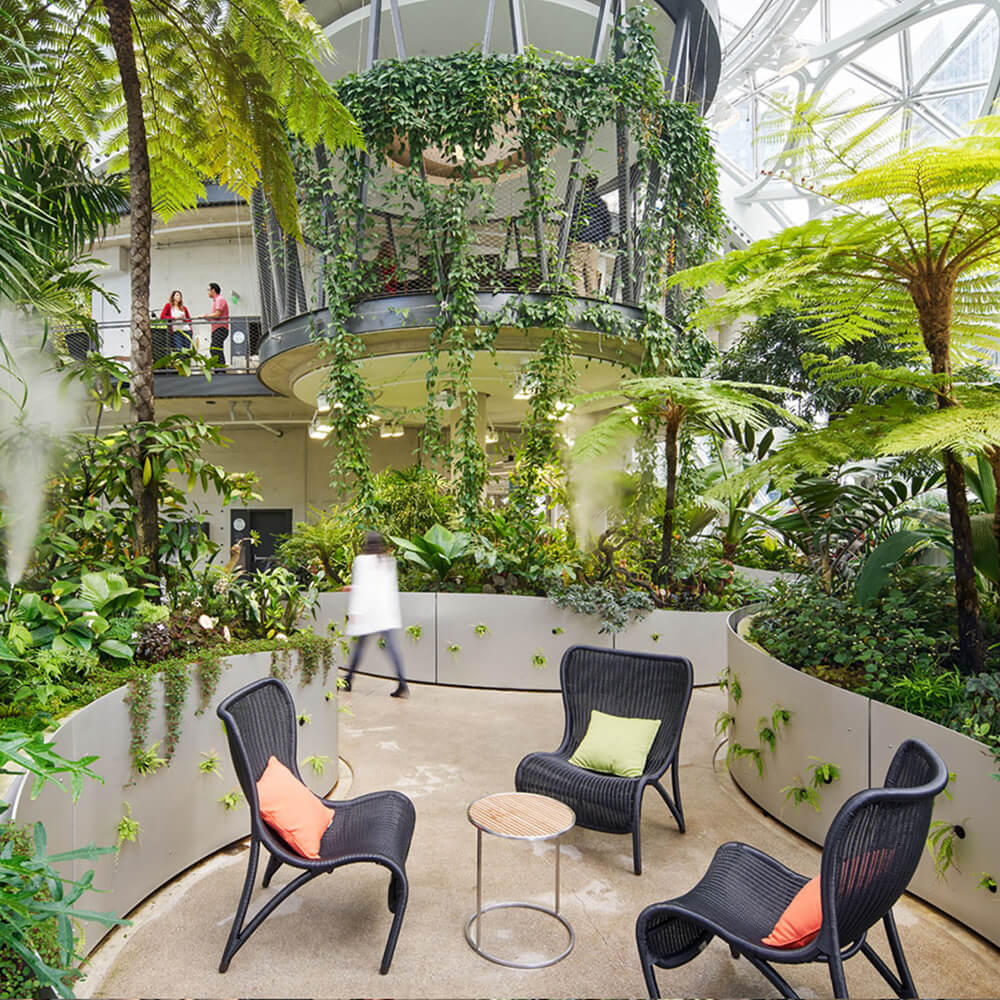 In a nutshell, biophilic design is all about increasing connectivity between humans and their natural environment by bringing the outdoors in. This can be through direct experiences like natural light from windows and skylights, spaciousness, and the inclusion of live plants, or indirect experiences like biodynamic lighting, green wall dividers, and furniture made of natural materials like wood and stone.

As designers create new ways to meet the needs of today’s workers, we suspect the open-plan office will eventually go the way of big hair and colorblocked windbreakers. And we’re not sorry to see it go, especially with the wealth of new corporate design ideas that make an office not just more efficient and effective, but also a place that improves the lives of the people who use it every day.

How the Universally Hated Cubicle Came to Be
How Open Office Spaces Are Killing Us
Study: Open Offices Are Making Us All Sick
So Begins the Quiet Revolution of the 50 Percent
10 Real Risks of Multitasking, to Mind and Body
Why It’s Time to Ditch Open Office Plans
Everyone hates open offices. Here’s why they still exist.

Best Investment for You and the Planet
Read more

What Is Biophilic Design?
Read more